Today’s jobs report shows that after two years of net job losses, payroll employment grew modestly in 2010, with private employers adding jobs every month (see chart).  The drop in December’s unemployment rate was welcome, but a key reason for it was people leaving the labor force rather than finding new jobs.  The jobs deficit remains large, and we will need much faster job growth than we saw in 2010 to simultaneously bring people back into the labor force and reduce the unemployment rate to acceptable levels over the next few years.

The Great Recession of 2007-2009 created an enormous jobs deficit, drove up unemployment, and discouraged many people from even looking for work because their prospects of finding a job were so dismal.  A return to full employment will require not only erasing the recession-driven jobs deficit but also generating enough jobs to account for population growth since the start of the recession and for people re-entering the labor force as job prospects improve.

Payroll employment grew, on average, less than 100,000 jobs a month in 2010.  When the labor force is growing, that’s not enough to reduce unemployment.  We estimate that that rate of job growth would have to roughly triple between now and the end of 2015 just to restore labor market conditions – five years from now – to what they were at the start of the recession (roughly a 5 percent unemployment rate and higher labor force participation).  A considerably faster return to reasonably high employment would take job growth closer to 400,000 a month. 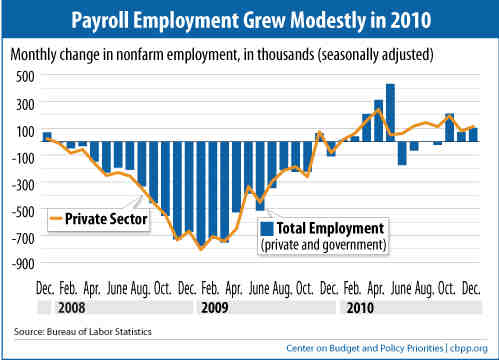 Although the Federal Reserve remains committed to a low-interest-rate monetary policy conducive to economic growth, the new Congress will not likely provide any additional fiscal support beyond the measures that President Obama and the last Congress enacted in the tax cut-unemployment insurance deal of December.  In fact, House Republican proposals to slash domestic “discretionary” funding almost immediately would, if enacted, add to the drag that’s  already on the economic recovery due to the winding down of federal 2009 Recovery Act spending (such as for infrastructure) and the sharply contractionary actions that state and local governments continue to take in the face of huge and ongoing budget shortfalls and the end of federal fiscal relief.  These are heavy headwinds for an economic recovery that is still struggling to really take off.  Immediate deep cuts in domestic appropriated programs would make the headwinds even stronger and cause substantial new job losses, which is just the opposite of what the economy needs.

About the December Jobs Report