Another dismal jobs report shows that the recession is deepening and confirms the need for a substantial and well-targeted economic recovery package.  The assistance for unemployed workers described below should be a key component of that package.

The recession that began in December 2007 is now in its 13th month, and the economy is hemorrhaging jobs.  The unemployment rate has surged above 7 percent to its highest point since January 1993, and hence higher than at any point in the 2001 recession.  This week the Congressional Budget Office stated that it anticipates the recession “will last until the second half of 2009, making it the longest recession since World War II.”  It could be the deepest as well, according to CBO.  Overall labor market trends are grim. 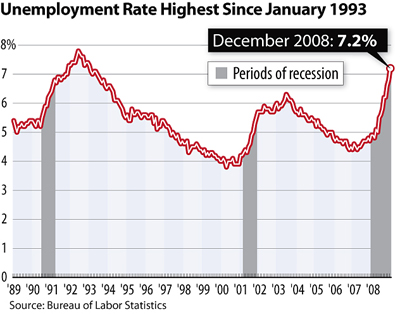 Unemployment Insurance Measures Should Be Part of Recovery Package

Legislation providing additional weeks of unemployment insurance (UI) benefits to those who exhaust their regular benefits before they can find a job is scheduled to expire in March.  A renewal of this program should be part of any stimulus package.  Two other UI measures are appropriate when labor market conditions are as distressed as they are now and should also be included.

As the Congress and President-elect Obama prepare an economic recovery package, it is important to remember that support for unemployed workers (along with a temporary increase in food stamp and other benefits targeted on low- and moderate-income families and fiscal relief to budget-constrained state governments) not only helps those hit hardest in a recession but is among the most effective and fast-acting ways to help arrest an economic contraction and turn the economy around.