Today’s employment report shows little evidence that the emerging economic recovery is reviving the job market. Although job losses continued to moderate in August, the percentage of Americans with a job reached its lowest level since 1984 (See figure). 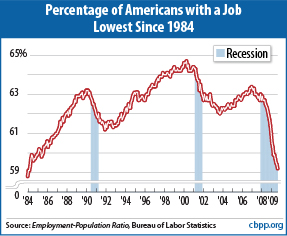 Economic activity seems to be increasing, but employers remain reluctant to hire, and people who want to work remain discouraged about their prospects of finding a job. Improvements in the labor market typically lag behind a turnaround in economic growth, so unless things change dramatically, job losses will continue and the unemployment rate will keep rising for a significant period of time after the formal end of the recession.

President Obama and Congress enacted significant temporary unemployment insurance benefits (UI), including additional weeks of benefits to people who exhaust their regular 26 weeks of benefits. To provide assistance for job-seekers and to provide a valuable boost to economic activity, policymakers should renew the temporary UI benefits programs, which expire at the end of this year. They should also consider additional assistance for job-seekers who have exhausted or will soon exhaust all their UI benefits in what continues to be a very harsh labor market, where a third of the unemployed have been looking for work for 27 weeks or longer.

September marks the 21st month since the start of the recession in December 2007, and a host of data in today’s report illustrate the ongoing weakness in the labor market.