Poor families faced income tax bills that pushed them deeper into poverty last year in nearly half of the states with an income tax, according to a new report from the Center on Budget and Policy Priorities. Income tax bills on poor families in those 18 states range from a few dollars to several hundred dollars, which is a significant amount for a family struggling to make ends meet, the report said.

“In today’s economy, low-income families are finding it more difficult than ever just to make ends meet,” said Jason Levitis, the report’s co-author. “Collecting income tax from these struggling families makes it even harder for them to work their way out of poverty.”

The report measures the “tax threshold” in each state — the income level at which families begin owing income taxes. In 18 of the 42 states that levy an income tax, the threshold for two-parent families of four was below $21,203, the 2007 poverty line for such a family. The remaining states as well as the federal government do not tax working poor families.

The number of states that taxed poor families was one fewer than in 2006, as New Jersey adopted an earned income tax credit (EITC) improvement that pushed its threshold above the poverty line. A number of other states made significant improvements. But income-tax treatment of the poor worsened elsewhere as inflation eroded the value of provisions intended to protect the poor from taxation.

Among the report’s findings: 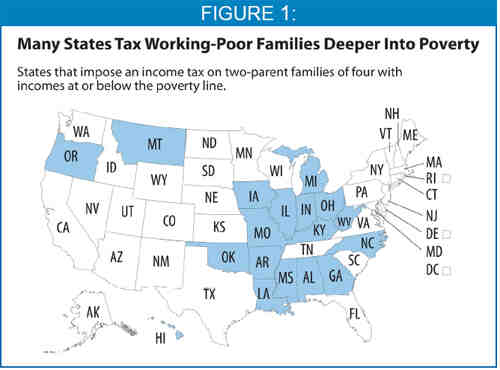 Over the last two decades, state policymakers increasingly have viewed the exemption of poor families from taxation as a straightforward way to reduce poverty and support work. The number of states levying income tax on poor two-parent families of four decreased from 24 to 18 between 1991 and 2007. The federal government has exempted poor families from tax since the mid 1980s.

Future years are set to bring some additional improvement. The District of Columbia, Indiana, Louisiana, Maryland, Michigan, New Jersey, North Carolina, Oklahoma, and West Virginia have recently enacted reforms that will reduce taxes on low-income families over the next several years. If these changes had been in effect in 2007, the number of states taxing poor families of four would have been 15 rather than 18. The three states that appear likely to end their taxation of poor families, based on these enacted reforms, are Michigan, North Carolina, and Oklahoma.

Even in a time of widespread state budget shortfalls, there are a number of inexpensive, effective solutions for state policymakers to consider. These include state EITCs and other low-income tax credits, no-tax “floors” (an income level below which a family owes no tax), and adequate personal exemptions and standard deductions.