The possible elimination of Tennessee’s TennCare program, suggested by Governor Bredesen, would have far-reaching consequences for state residents that would reverberate far beyond the individuals who would be dropped from TennCare, a new report by the Center on Budget and Policy Priorities finds.

Some 430,000 Tennesseans — nearly one-third of those now enrolled in TennCare — would lose publicly funded coverage, the Governor estimates. Most of the people who stand to lose coverage are members of low-income working families. Some 120,000 of them are children.

The remaining two-thirds of TennCare beneficiaries would be switched to a Medicaid program that would replace TennCare. The Governor has acknowledged that the savings from dropping the 430,000 individuals likely would not be sufficient to produce the level of savings he seeks and that the beneficiaries remaining on Medicaid may face more limited coverage as well.

Such reductions in coverage would likely be instituted because the elimination of TennCare would trigger significant losses of federal funds that now support the program. Reducing state health care spending by $650 million as the Governor suggests would trigger the loss of $1.2 billion in federal matching funds. In addition, the federal government provides special funding for hospitals under TennCare that likely would not continue if the program were eliminated.

The loss of $1.2 billion in federal matching funds would have serious consequences for the state’s economy, the Center’s analysis finds. Business activity would be expected to drop by $1.6 billion, and about 14,500 jobs would be lost, according to estimates derived from a model developed by the Bureau of Economic Analysis of the U.S. Department of Commerce.

Most of the individuals who would be dropped from the TennCare program would become uninsured. But they still would need health care. The analysis finds, based on studies by the Urban Institute, that newly uninsured patients would seek between about $230 million and $450 million a year in health care services for which they would not be able to pay. Health care providers would have to absorb these costs as “uncompensated care.” Health care providers could be hit hard, as they would lose the direct reimbursements from TennCare and also have to provide uncompensated care for the newly uninsured patients.

“Terminating TennCare would be harmful not just to the hundreds of thousands of Tennesseans who would lose health care coverage,” stated Victoria Wachino, health policy director at the Center and co-author of the report. “It also would have effects throughout the state economy and squeeze many of Tennessee’s health care providers.”

Additional Cuts Would Be Likely

Tennessee established TennCare in 1994 to provide broader health coverage to low-income and disabled residents than is available under the standard Medicaid program. This September, the state requested federal permission to restructure TennCare substantially, arguing large changes were needed to save the state money. Last week the governor placed that request on hold and announced plans to eliminate TennCare completely if certain court orders under which TennCare operates are not removed or substantially withdrawn.

In February 2004, consultants the state hired to propose cost-saving changes to TennCare examined the option of ending the program. They concluded that the savings from this step would be “largely offset” by the loss of federal funds, since the federal government now covers certain costs through TennCare that it would not cover if TennCare were eliminated.

The state’s consultants suggested that if TennCare were eliminated, the state might have to impose additional cuts — including deep benefit reductions for Medicaid beneficiaries — to obtain the level of savings the Governor seeks. The Governor recently confirmed that other cuts could be needed, including limiting the number of prescription drugs and physician visits per beneficiary.

The loss of federal funds would have a ripple effect through the Tennessee economy. The loss of $1.2 billion in federal matching funds would cost the state $1.6 billion in business activity and about 14,500 jobs, according to estimates derived from an economic model developed by the U.S. Department of Commerce’s Bureau of Economic Analysis.

Most of the damage would occur in the health care sector, as hospitals, clinics, pharmacies and other health care providers lost revenue and in turn were forced to lay off staff. However, the damage would spread to other areas of the economy, as well, such as the retail and real estate sectors, as workers who lost their jobs reduced their purchases or had trouble making rent or mortgage payments.

Cost of Treating the Uninsured Likely to Jump Substantially

Most of the people who would lose public health coverage if TennCare is eliminated would become uninsured. These individuals would still need medical care. As a result, many of them would seek free or reduced-price health care from hospitals, clinics, and other health care providers.

Between two-thirds and four-fifths of the people losing TennCare coverage would be expected to become uninsured. That would translate into uncompensated care costs for this newly uninsured group of roughly $230 million to $450 million per year, the Center’s study finds. These added costs would be borne by health care providers, many of which are state- or county-owned facilities or non-profits. In contrast, under TennCare, federal matching funds pay a substantial majority of the cost of providing health care to these individuals. The new uncompensated care burdens, coupled with the loss of TennCare payments, could create serious financial problems for many health care providers in the state. 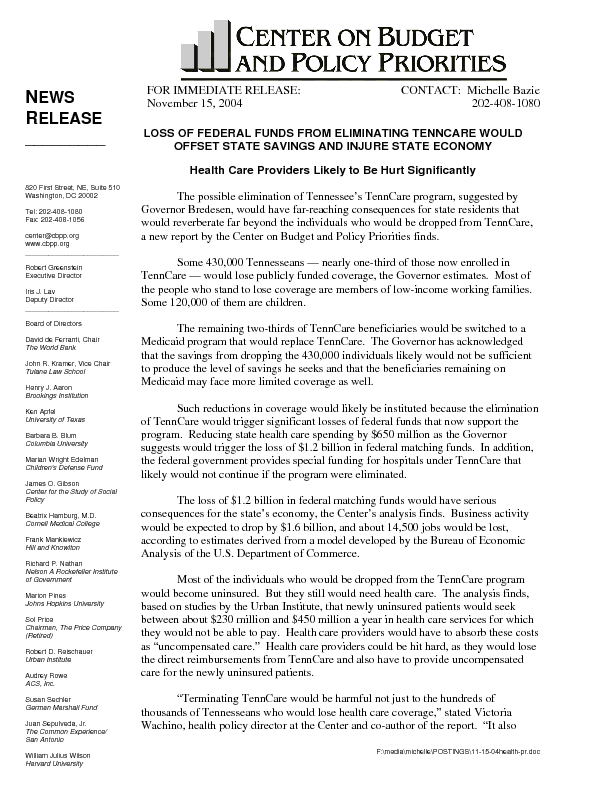 PDF of this Press Release (2pp.)