Press Release: Income Inequality Grew in Most States Over Past Two Decades

In fact, the nation’s longstanding trend of growing inequality accelerated since the late 1990s as incomes fell for poor families and stagnated for middle-income families in a number of states.

The study, based on inflation-adjusted Census data, is one of the few to examine income inequality at the state level. It measured and compared income trends among the highest-, middle-, and lowest-income families in three periods – the late 1980s, the late 1990s, and the mid-2000s. (If anything, the study understates inequality because it does not include income from capital gains, which goes overwhelmingly to those at the top.)

Low- and middle-income families have reaped few gains since the late 1990s, despite the recent years of economic prosperity. Average incomes actually fell by 2.5% for those in the bottom fifth of the income scale and rose by just 1.3% for those in the middle fifth. Meanwhile, incomes climbed 9% for those in the top fifth.

“Before the recent downturn hit, our economy was generating solid income gains. The problem was that high levels of inequality meant these gains failed to reach middle- and low-income families, whose living standards stagnated or even declined,” said Jared Bernstein, senior economist at the Economic Policy Institute and co-author of the report. “As we head into an economic downturn, these families are ill-prepared to weather the storm.”

Elizabeth McNichol, senior fellow at the Center and the other co-author, added, “Rising inequality raises basic issues of fairness, and harms the nation’s economy and political system. It dampens economic prosperity as incomes stagnate for tens of millions of average Americans and it threatens to widen the nation’s political cleavages, generating more cynicism about political institutions.”

During the longer time period – from the late 1980s to the mid-2000s – in 37 states, incomes grew much more slowly for the bottom fifth of families than for the top fifth. In these states, the incomes of the richest fifth grew by an average of $36,300 (39 percent), while the incomes of the poorest grew by only $1,600 (9 percent). The purchasing power of the poorest families increased by just $93 per year.

Income inequality grew over the last two decades due to both economic trends and government policies. Wages and salaries grew faster for those at the top of the income scale. Various factors explain growing wage inequality including long periods of higher-than-average unemployment, globalization, the shift from manufacturing jobs to low-wage service jobs, immigration, the weakening of unions, and the declining value of the minimum wage.

Those in the highest reaches of the income scale also reaped the benefits of the growth in the stock market through income from interest, dividends, and the sale of assets such as stocks.

While many of the causes of widening income gaps are outside states’ control, states can mitigate the problem of growing inequality in a number of ways.

Specifically, states can close the budget gaps that the downturn has caused without widening income gaps. For example, states can avoid raising sales taxes and fees that hit low-income families hardest, and rely more on income taxes. Or, they can enact or expand tax credits to low-income taxpayers to offset the impact of regressive tax increases.

State policy makers can also bolster the safety net in order to improve economic opportunity for those struggling to make ends meet. States can:

The study is based on Census income data that have been adjusted to account for inflation, the impact of federal taxes, and the cash value of food stamps, subsidized school lunches, and housing vouchers. The study compares combined data from 2004-2006 with data from the late 1980s and late 1990s, time periods chosen because they are comparable peaks of their respective business cycles. 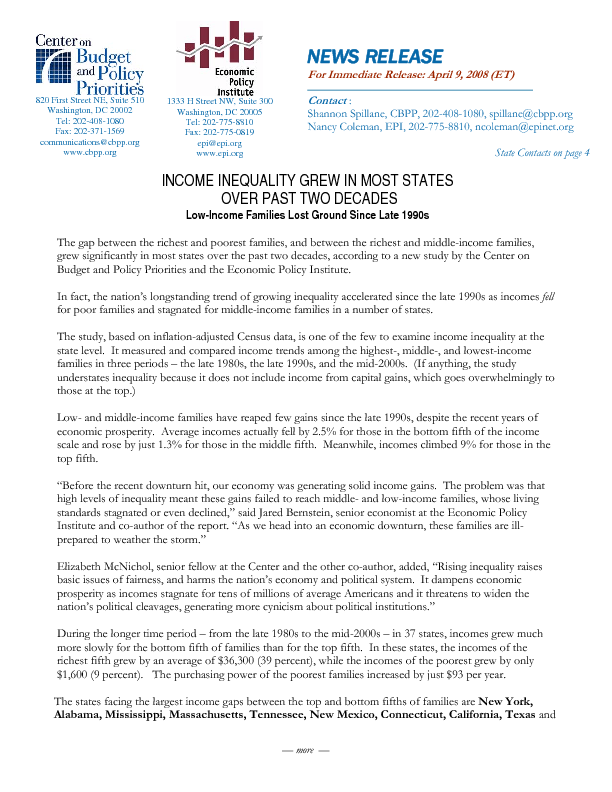 PDF of this press release (5pp.)