Commentary: The House Republican Health Bill – A Test for Members

When House GOP leaders unveiled their legislation to repeal the Affordable Care Act (ACA), House Republicans faced a fundamental question: would they insist on changes to make the bill fairer for the tens of millions of low- and moderate-income people across America who would be treated harshly under it?

After all, the Congressional Budget Office (CBO) had estimated that it would cause 24 million Americans to lose health insurance by 2026, cut Medicaid by $880 billion over the decade, cut in half by 2026 the subsidies that help modest-income people afford insurance, and eliminate all of the assistance to help modest-income people with high deductibles and cost-sharing.  Rubbing salt in the wound for low- and moderate-income people, the bill also included $600 billion in tax cuts, the majority of which would go to the top 1 percent of Americans.

House leaders promised changes.  But the changes in their updated bill, unveiled the night of March 20, are astounding.  In some cases, they’re minor improvements that leave most of the damage in place.  In other cases, they make the damage more severe.  The number of Americans who would lose coverage won’t likely change much.  Meanwhile, the increases in out-of-pocket costs — especially for near-poor working families, people aged 50-64, and others who live in areas with high health-insurance costs (especially rural states) — would remain very large.  Most shockingly, the biggest winners from these changes are the top 1 percent — the very people who were already the big winners under the previous version of the legislation.

One change in the bill gives states the option to convert their Medicaid programs (except for their elderly and disabled beneficiaries) into a block grant, under which states would get a fixed amount of Medicaid funding for the year that wouldn’t change if a recession hit, a plant closed, more people became poor, an epidemic struck, or anything else happened that raised health costs.  Because a state’s block-grant allocation would rise each year only at the general inflation rate, which is well below the rate at which U.S. health care costs rise, the block grant would necessitate increasingly deep Medicaid cuts over time.  Nor would the block grant funding level adjust for population growth, either.

Why would any state consider this option?  Because the bill dangles an incentive in front of conservative state policymakers:  it allows states that choose the block grant to substantially reduce the amount that states must contribute to get the federal funds.  Governors and legislators who want to fund big tax cuts, or close budget holes, could find that enticing.  Years later, they or their state successors would have to cut Medicaid coverage substantially to fit within the shrunken amount of both federal and state Medicaid dollars.

The revised bill also would let any state impose work requirements on poor adults who aren’t elderly, disabled, or pregnant as a condition of Medicaid coverage — with only narrow exemptions.  Those affected could include a young adult who’s attending community college to gain skills he or she needs to succeed in the marketplace, a married mother who’s caring for an infant, or an adult who’s caring for an infirm or disabled parent rather than institutionalize the parent.  Work requirements also could be imposed on poor individuals who need treatment — for mental health issues or substance abuse — to get or hold a job.  And, states imposing work requirements wouldn’t have to provide job training or other employment services.  The requirement wouldn’t likely mean that many more people would find jobs; instead, its main effect would likely be to leave more people who are poor and vulnerable uninsured.

The revisions for private coverage are also woefully inadequate.  Mainly, the revised bill expands the tax deduction for high medical expenses, which is mainly used by — and of greatest benefit to — the affluent.  Currently, people who itemize deductions can deduct medical expenses that exceed 10 percent of their income.  The earlier version of the bill lowered that threshold to 7.5 percent.  The revised bill lowers the threshold further — to 5.8 percent of income — reportedly at a cost of $85 billion over ten years.  The Tax Policy Center reports that more than three-quarters of the resulting tax cuts would go to people with incomes over $100,000, while less than 3 percent would go to people with incomes under $50,000.

Under the bill’s previous version, the more than 10 million people who now buy coverage through the ACA’s marketplaces would see their tax credits cut by an average of more than $2,000, with far larger cuts for those who are older, low income, or live in high-cost states.  The expanded tax deduction in the revised bill would do little or nothing for most people who’d be hurt by shrinking the tax credits.

To be sure, House leaders have indicated flexibility over how to use this $85 billion.  They’ve said that instead of using it on the medial expense deduction, the Senate could use it to improve the bill’s tax credits for buying coverage.  But the legislation cuts $312 billion in subsidies over ten years by sharply reducing the ACA’s premium subsidies and entirely eliminating its cost-sharing subsidies.  The $85 billion could address only a small fraction of the large cost increases that these changes would impose on millions of people.

As a result, if $85 billion were used to raise tax credits for people aged 50-64, while doing nothing for anyone else:

More Money to the Most Well-Off

House leaders revised their earlier legislation in one more fundamental way: to hand billions of dollars more to the top 1 percent.  They’ve done so by starting the bill’s large tax cuts — most of which go to the top 1 percent — a year earlier than last week’s bill did, in 2017 rather than 2018.

The audacity of this revised legislation is stunning.  It raises the question of whether a majority of our elected representatives will vote to threaten the health care, and thereby worsen the lives, of tens of millions of their constituents.

Will this legislation stir the conscience of House members to think about the tens of millions of low- and moderate-income Americans whose fortunes are at stake?  The coming days will tell. 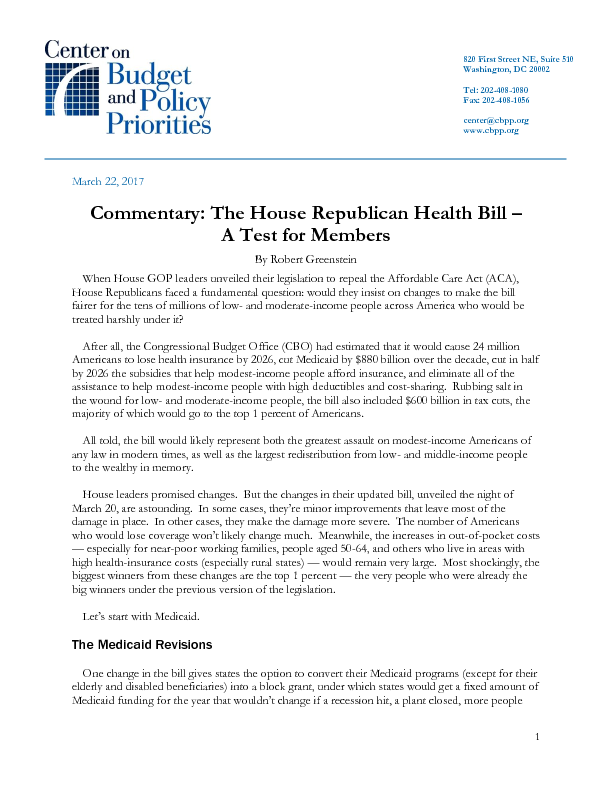 PDF of this commentary (3 pp.)