Commentary: How Effective Is the Safety Net?

Kristof points out that there are no magic bullets and that we need well-designed studies and careful research to give us more information about what works.  He cites, for example, evaluation data showing that a program under which nurses visit the new parents of poor, at-risk children produces results.  Federal funding for this program, which now comes through the health reform law, is scheduled to run out after 2015.  Will policymakers have the wisdom to extend this program and to improve it based on what we’ve learned?  That’s the type of action we need to take.

Unfortunately, Kristof’s otherwise excellent column also contains a significant misjudgment.  He says that despite the growth of various social programs over recent decades, the poverty rate is no lower today than it was in the late 1960s, and he seems to conclude that the current system of anti-poverty programs largely addresses only symptoms of poverty and doesn’t reduce poverty itself.  However, the comparison of today’s poverty rate to the rate in the 1960s isn’t valid, as explained below, and Kristof overlooks recent research showing that safety-net programs lift millions of people out of poverty and, in a number of cases, have positive long-term effects on children’s outcomes.

Most analysts agree that using the official poverty measure to compare today’s poverty rate to the rates in the late 1960s yields highly distorted results due to serious flaws in the poverty measure.

The official poverty measure only considers cash income when determining whether a family is above or below the poverty line.  Hence, it counts cash welfare payments, which have fallen dramatically since the late 1960s.  (Benefit levels for a family with no other income have fallen 67 percent since 1970 in the typical state, after adjusting for inflation.  Also, the share of poor families with children that receive cash welfare has plummeted from over 80 percent several decades ago to under 30 percent today.)  Yet the official poverty measure doesn’t count noncash and tax benefits, such as SNAP (food stamps), refundable tax credits like the Earned Income Tax Credit, or rental subsidies, which provide substantially more help to poor families today than in the late 1960s.

Comparing poverty rates today with those of more than 40 years ago, based on a poverty measure that counts the part of the safety net that’s shrunk but overlookskey parts that have expanded and now add substantially to low-income families’ purchasing power, produces a result that seemingly shows no progress in reducing poverty.  But such a comparison has little meaning.

So what do we know about the safety net’s effect on poverty?  A fair amount, and the results are often impressive.

Because of the shortcomings with the official poverty measure, a National Academy of Sciences (NAS) expert panel in the 1990s recommended a more comprehensive measure of poverty that counts noncash and tax benefits; the Census Bureau now issues poverty measures based on the NAS recommendations, as well as the “official” measure.  The NAS-based measures don’t go back to the 1960s, but they show that the safety net makes a big difference.  Under the Census measure that most closely resembles the NAS recommendations, the safety net cuts poverty nearly in half.  If the safety net hadn’t existed in 2010, nearly 29 percent of Americans would have been poor, nearly twice the actual figure of about 15 percent (see Figure 1).[2]

To be sure, questions can be raised about the effects of safety-net programs on individual behavior, such as work effort, and how that affects poverty.  To address those questions, some of the leading researchers in the field conducted a comprehensive review of the available research and data on the safety net’s impacts on poverty.  In a study issued by the National Bureau of Economic Research, they find (after taking behavioral effects into account) that the safety net lowers the U.S. poverty rate by approximately 14 percentage points.[3]   In other words, the safety net keeps or lifts one of every seven Americans out of poverty.  That’s more than 40 million people.

Programs Also Have Other Important Effects

Beneficial effects of key safety-net programs, especially on children, go well beyond poverty reduction.  In the late 1960s, teams of medical researchers found rates of childhood malnutrition and nutrition-related conditions in various poor areas of the United States that rivaled those in some Third World countries.  These findings helped create a bipartisan consensus to improve and expand nutrition programs, and when the researchers returned to the same poor areas a decade later, they found dramatic improvement.  Child malnutrition and related conditions had become rare (and have remained so ever since).

Crediting the Food Stamp Program as the single biggest reason for this progress, the researchers wrote:

In the Mississippi delta, in the coal fields of Appalachia and in coastal South Carolina — where visitors ten years ago could quickly see large numbers of stunted, apathetic children with swollen stomachs and the dull eyes and poorly healing wounds characteristic of malnutrition — such children are not to be seen in such numbers.[4]

Recent research provides further evidence of positive effects, indicating that children who had access to food stamps in early childhood, and whose mothers had access during pregnancy, had better health as adults.

Findings in other areas are also quite strong.  For example, participation in Medicaid is associated with better health and reduced mortality, as well as less household debt.

The findings regarding the Earned Income Tax Credit (EITC) are particularly striking.  An extensive body of research shows that the EITC substantially increases work among poor single parents.  And recent studies indicate that the EITC and other policies that significantly boost poor families’ incomes improve children’s school achievement and appear to lead to these children working more and earning more as adults.

In short, existing programs shrink poverty substantially and give large numbers of children a better chance.  For millions of Americans who have fallen on hard times, these programs do a good job of helping them get through the hard times and make it out of poverty.

But for Some Families and Children, Other Strategies Also Are Needed

Despite these important effects, however, there are too many other poor families and children — those Kristof writes so eloquently about — for whom the existing programs and supports, while often crucial, are insufficient.

As Kristof notes, too many children start kindergarten already far behind, and their future opportunities — including going to college and succeeding in a job — are seriously constrained.  Children whose families live well below the poverty line or who live in very disadvantaged neighborhoods can face particularly difficult challenges.

We need to do better in identifying, testing, and evaluating additional measures that could be effective in enabling these children to overcome the formidable obstacles they too often face, and in enabling more adults who are poor to have a better chance of succeeding in the labor market.  And, when we know that interventions are effective, we need to make sure they’re available to people who would benefit from them.  For significant numbers of poor children and families, programs like Medicaid, food stamps, and the EITC are vital, but they are not sufficient by themselves to overcome the serious multiple barriers these individuals and families can come up against.

Yet as we look to identify and institute effective interventions, we should be careful not to lose sight of the safety net’s considerable accomplishments or the progress that has been made in improving the lives of tens of millions of less fortunate Americans.

[3] Yonatan Ben-Shalom, Robert Moffitt, and John Karl Scholz, “An Assessment of the Effectiveness of Anti-Poverty Programs in the United States,” available at http://www.irp.wisc.edu/publications/dps/pdfs/dp139211.pdf.  See also Arloc Sherman, “Public Programs Keep Millions Out of Poverty, New Study Shows,” Off the Charts blog, May 18, 2011, http://www.offthechartsblog.org/public-programs-keep-millions-out-of-poverty-new-study-shows. 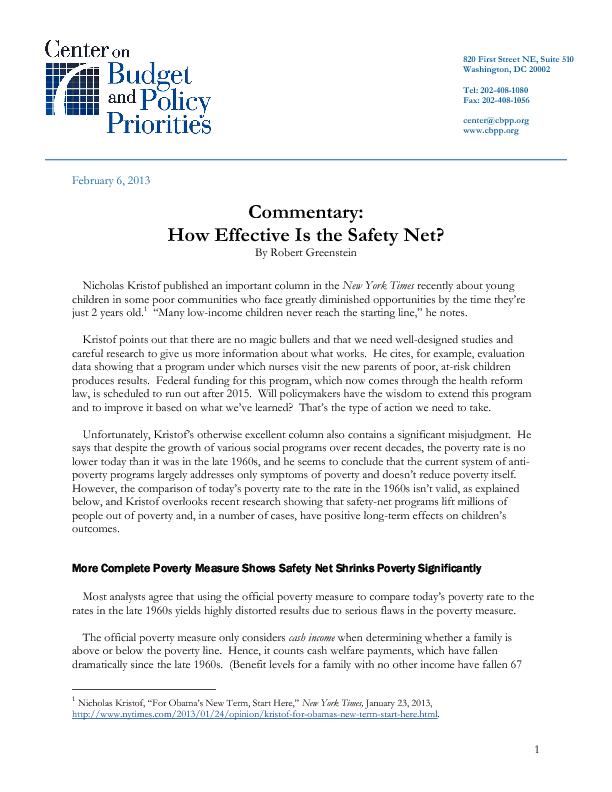 PDF of this commentary (4pp.)