Note: This is the first in a series of posts on extreme poverty that CBPP will do this week.

Living on less than $2 per person a day is one World Bank definition of poverty for developing nations.  Unfortunately, this threshold is increasingly relevant to the United States, according to a new study from the National Poverty Center.

The figures are for cash income only, although the authors —the University of Michigan’s H. Luke Shaefer and Harvard University’s Kathryn Edin — note that extreme poverty is up even when one counts non-cash benefits like SNAP (food stamps).  We will discuss the connection between these findings and food and housing assistance in follow-up posts. 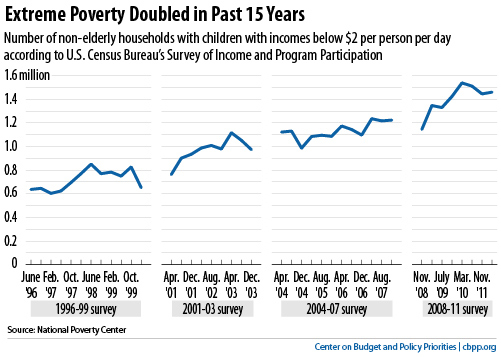 The authors note an apparent connection between the sharp growth in extreme poverty and the loss of public assistance benefits, stating that “This growth has been concentrated among those groups that were most affected by the 1996 welfare reform.”  The 1996 law replaced Aid to Families with Dependent Children, which primarily provided cash assistance to eligible families, with the Temporary Assistance for Needy Families (TANF) block grant, which provided states with a fixed level of funding which they could use for many different purposes.

The report found that the rate of extreme poverty doubled for households overall but nearly tripled for female-headed households, which make up the bulk of the TANF caseload.

Also, the sharp decline in the value of TANF benefits over time means that many TANF recipients remain extremely poor.  Benefits are below half of the poverty line in every state.  For a family of three, benefits are only about $2 per person per day in Mississippi and Tennessee and only slightly more than $2 per person per day in Alabama and South Carolina, for example.

Co-author Edin is an authority on the ways in which extremely poor households scraped by day-to-day in the pre-welfare-reform era.  Today, say Shaefer and Edin, “it is unclear how households with no cash income — either from work, government programs, assets, friends, family members, or informal sources — are getting by even if they do manage to claim some form of in-kind [i.e., non-cash] benefit.”

Research has shown that poverty in childhood has a long and harmful reach.  Even modest changes in family income for young children in poor families significantly affect their educational success — and may have a big effect on their earnings as adults.

February 10, 2012
PreviousIn Case You Missed It...
NextIncomes Bouncing Back at the Top
Stay up to date
Receive the latest news and reports from the Center