As people rush to file their income tax returns by Tax Day (April 15), a few reminders: First, as the Brookings Institution’s Vanessa Williamson explained: “Residents of the United States are unusually likely [compared to other countries] to see chipping in their share as a civic duty, a moral obligation, and a patriotic act.” Second, people need to understand where their tax dollars are going, how the 2017 tax law prioritized the wealthy, and how a new bill better prioritizes working families, as the following charts show.

1. Taxes pay for federal programs. Some 26 percent of federal spending, largely financed through taxes, goes for Medicare, Medicaid, and other health programs. (See chart 1.) Americans who benefit include an elderly woman having a hip replaced and a young girl being treated for leukemia. Education makes up another 3 percent of federal spending, benefiting first-generation college students across the country who get Pell Grants. 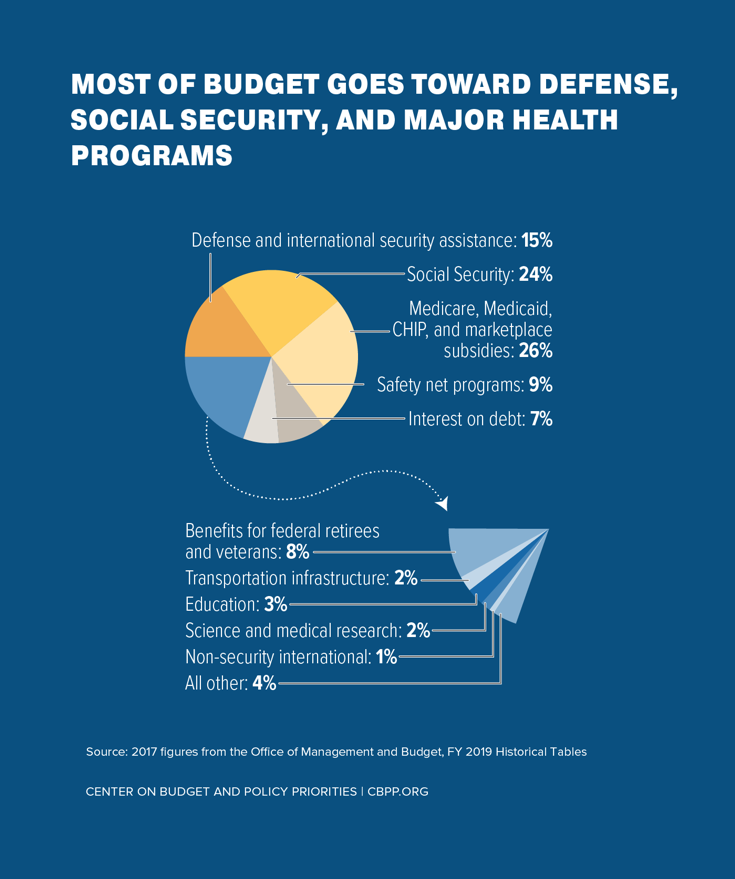 2. People’s pride in paying taxes is important because our tax system is largely based on voluntary compliance; in fact, the United States has one of the highest rates of tax compliance among developed countries. That’s based on the public’s trust that the IRS is enforcing the law fairly and people are paying the taxes they owe.

But the President and Congress have cut funding for the IRS enforcement and operations support divisions by a quarter since 2010. (See chart 2.) The enforcement division’s workforce has also eroded by roughly 30 percent; it now has about the same number of revenue agents (auditors who tend to audit the most complex returns) as in the 1950s when the economy was roughly one-seventh its current size. Audits of millionaires, in particular, are down sharply.

The President and Congress need to make a multi-year commitment to re-build the IRS enforcement division. As we explain here, there have been some positive signs recently. 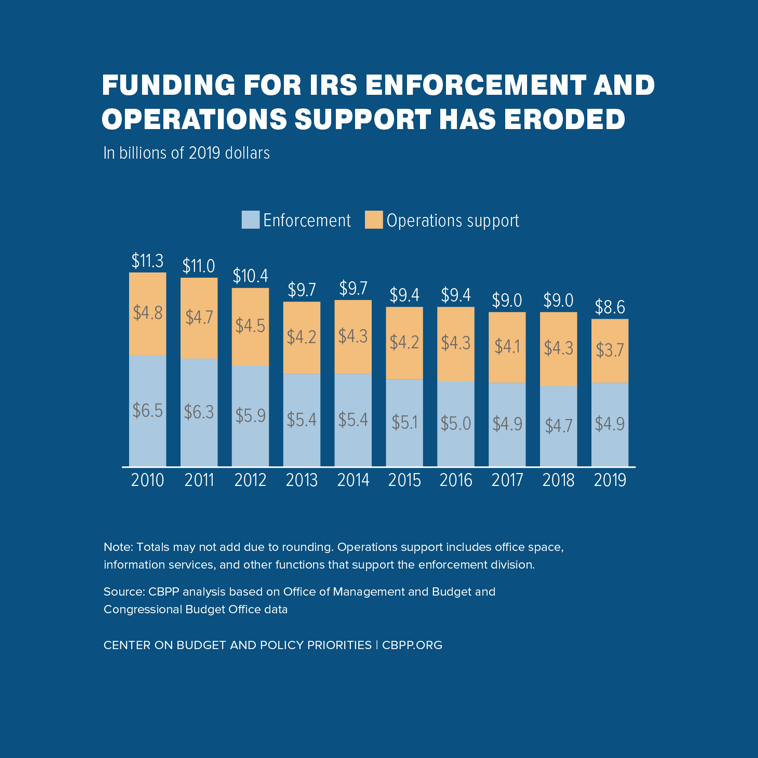 3. This is the first filing season under the 2017 tax law. In one of its fundamental flaws, it gives the richest 1 percent of people roughly triple the percentage income boost as people in the bottom 60 percent. (See chart 3.) Enacted at a time of largely stagnant working-class wages and growing income inequality, the law only made things worse and policymakers should restructure it.

4. The 2017 tax law’s centerpiece was its deep cut in the top corporate tax rate from 35 to 21 percent, which contributes to all three of its major flaws: the corporate tax cut is skewed to the top since it mostly benefits wealthy shareholders and highly compensated employees such as CEOs (see chart 4); it costs the federal government much-needed revenue; and, by putting the corporate tax rate far below the top individual tax rate, it creates a potentially significant tax sheltering opportunity for wealthy Americans. Policymakers need to rethink this and other 2017 tax law provisions.

5. The 2017 law also created a way for high-income people to avoid the top individual tax rate. Previously, ”pass-through income” — the income that owners of businesses such as partnerships and sole proprietorships reported on their individual tax returns — was taxed at the same rates as their wage and salary income. The main benefit of earning profits through a pass-through business rather than a corporation is that pass-through profits are exempt from the corporate tax.

The 2017 tax law introduced a new 20 percent deduction for pass-through businesses, which means that qualifying income faces a top individual rate of 29.8 percent, compared to 37 percent for wage and salary income. Effectively, these pass-through profits face neither the corporate income tax nor the top individual tax rate. Some 61 percent of the benefits from this deduction go to the top 1 percent, according to the Joint Committee on Taxation. (See chart 5.) And, as we’ve written, it threatens wages and labor standards because it may encourage “workplace fissuring” — firms acquiring services from workers without hiring them directly.

6. The 2017 tax law also doubles the estate tax exemption — the value of an estate that’s exempt from the estate tax — from $11 million to $22 million per couple. Fewer than 1 in 1,000 estates nationwide are large enough to remain taxable and, for those that are, the exemption on a couple’s first $22 million will give them a tax cut of $4.4 million.

As chart 6 underscores, over half of the value of the wealthiest estates flows from capital gains income, or income from gains in assets such as stock that has never been taxed because the gains were never realized (which usually occurs when the stock is sold). And when the heirs receive these assets, they also do not have to pay any capital gains tax on the accrued gain. Now even more of that income will bypass both the income and the estate taxes, because of the much higher estate tax exemption.

7. Chart 7 highlights a challenge that the 2017 law actually made worse: for decades, incomes at the top have grown sharply while working-class wages have stagnated. The median income of this racially, ethnically, and geographically diverse group of working-class households grew just 5 percent in the 38 years between 1979 and 2017, after adjusting for inflation. In contrast, households at the very top have enjoyed rapid income growth. Even the broader group of households with a bachelor’s degree saw their median incomes rise 33 percent over this period.

That’s the challenge that a new Senate Democratic bill, introduced by Senators Sherrod Brown, Michael Bennet, Richard Durbin, and Ron Wyden (and co-sponsored by 42 of the other 43 Senate Democrats), is designed to address. Called the Working Families Tax Relief Act, it would expand both the Earned Income Tax Credit (EITC) and Child Tax Credit (CTC), boosting the economic security of 46 million households. These credits are proven policy successes — rewarding work, reducing poverty, and improving children’s opportunities. But they can do considerably more. This bill’s EITC and CTC expansions would help address income stagnation that has affected white, Black, and brown working-class households.

8. A significant share of working-class Americans do important work in low-wage jobs such as home health aides, cooks, and janitors. (See chart 8.) The new bill recognizes that the EITC, while a proven boost for these wage earners, can and should do more. The bill would raise the EITC for families with children by roughly 25 percent, or by up to $881 more for families with one child, $1,457 for families with two children, and $1,092 for families with three or more children. 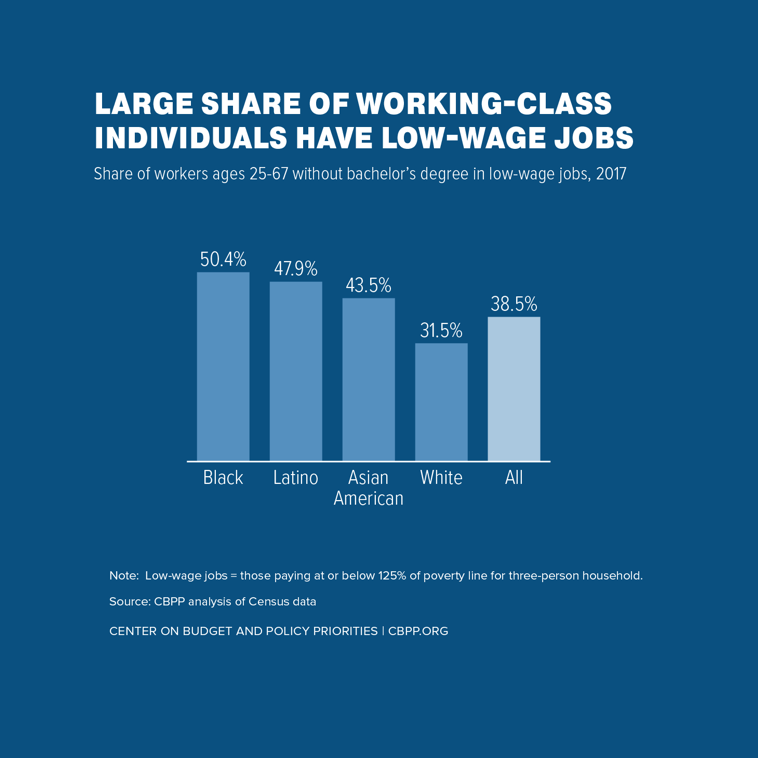 9. The new bill also addresses the EITC’s key shortcoming: it largely excludes working “childless” adults, including non-custodial parents, even though they face labor-market challenges just as workers with children do. This shortcoming is a central reason why more than 5 million working childless adults are taxed into, or deeper into, poverty.

A childless adult earning poverty-level wages of $13,340 as a cashier, for example, will owe $1,135 in payroll taxes (the employee share of that tax) and federal income taxes, while receiving an EITC of just $172. (See chart 9.) Under the legislation, the cashier would see her EITC rise to $1,797, lifting her $662 above the poverty line after accounting for federal taxes.

10. Proponents of the 2017 tax law tout its $1,000-per-child increase in the maximum CTC, but the full amount is not available to everyone: the law largely bypassed 26 million children in low- and moderate-income working families. Some 11 million children saw a token increase of $75 or less because their families’ earnings were too low. Thus, a single mother with two children working full time at the federal minimum wage and earning $14,500 received only a $75 increase ($37.50 per child). Another 15 million children received an increase larger than $75 but less than the full $1,000 per child largely because the 2017 law capped the refundable amount of the credit at $1,400 (adjusted for inflation going forward).

As a result, millions of children in low- or moderate-income working families received a CTC increase of no more than $400 per child and often far less. And while the 2017 law limited the CTC increases for lower-income working families, it made the CTC available to families with incomes up to $480,000 a year for a married couple with two children (as compared to $150,000 under prior law). A family with two children making $400,000 received a $4,000 CTC increase from the 2017 law. (See chart 10.) 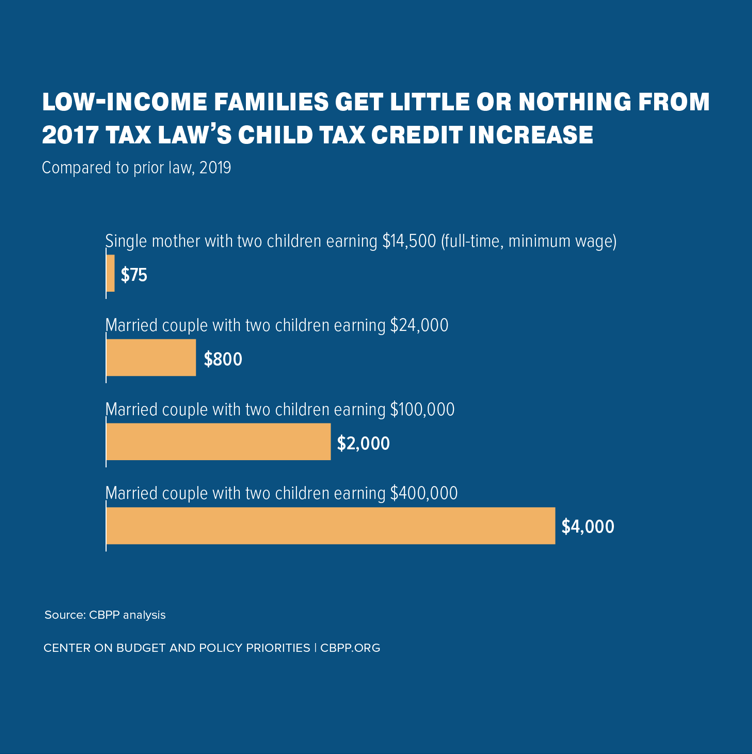 11. The Working Families Tax Relief Act fixes the CTC policy mistakes in the 2017 law and takes additional steps to improve the lives of millions of children.

First, it makes the CTC fully refundable, so children with family incomes below the levels at which the CTC begins phasing down would receive $2,000 per child age 6 or older and $3,000 per child under 6. Currently, the CTC’s refundable portion is limited to 15 percent of a family’s earnings above $2,500, up to a maximum credit of $1,400 per child (indexed to inflation). The very poorest families with children get nothing. And a family with two children that earns $5,000 receives a credit of $375 ($187.50 per child).

Second, it creates a new $3,000 Young Child Tax Credit by increasing the CTC by $1,000 for each child under age 6. (See chart 11.) More adequate family income in these critical early years can improve poor children’s life opportunities, research indicates. In fact, a National Academy of Sciences committee that Congress charged with recommending ways to reduce child poverty recently made a similar policy a centerpiece of its package of anti-poverty proposals.

April 9, 2019
PreviousThank You to Free Tax Volunteers
NextIn Case You Missed It...
Stay up to date
Receive the latest news and reports from the Center