As the President and Congress consider more economic relief for families and businesses, more fiscal aid to states, localities, tribal nations, and territories remains in doubt. Without a sizable amount of new aid, however, the twin pressures of a resurgent virus and a fragile economy will likely worsen an already severe state budget crisis.

States face a $555 billion shortfall through 2022, we project, and other forecasts suggest that local shortfalls could total about half of that. These shortfalls — sizable in nearly every state — are already driving deep, painful cuts to education and other services as well as huge layoffs and furloughs for state and local workers. Recent health and economic trends suggest that state and local shortfalls could grow even worse.

“No one knows yet the full economic impact of this pandemic,” an expert at the National Conference of State Legislatures said this weeksaid this week, “and most states are telling us that the revenues for the current fiscal year and potentially the next fiscal year are likely to fall even more.”

Here are some reasons why:

After plateauing in some places earlier this year, the virus has surged over the summer. COVID-19 has put hospitals, public health systems, doctors, nurses, and the state and local budgets that support them under enormous strain, and the human and financial tolls show few signs of slowing. Cases spiked considerably over the summer, especially across the South and West, and new hotspots continue to emerge. Additional costs will continue to accrue and tax revenues — dependent on consumer spending, open businesses, and stable incomes — will remain depressed as long as the virus keeps spreading.

The CARES Act of March provided $150 billion — a sizable if insufficient sum — for states, localities, tribal governments, and territories to confront the rising costs that are directly related to the pandemic. But that money cannot be used to offset revenue lost to the pandemic and most of it is already accounted for, which means policymakers need more help both to get COVID-19 under control and to fill the enormous revenue shortfalls that are undermining essential services.

The economy remains far weaker than before COVID-19 and any initial recovery is highly fragile. Most states shut down large portions of their economies in March and April as the virus descended on them, driving the sharpest single-quarter economic drop in U.S. history and sending state and local tax collections off a cliff. In response, states and localities imposed massive layoffs and furloughs, now totaling 2.8 million lost jobs between February and July, which (even accounting for seasonal variations) far exceeds the 750,000 lost in the Great Recession of a decade ago and its aftermath. There were about 1 million fewer state and local workers in July of 2020, compared to the same time last year (see chart). 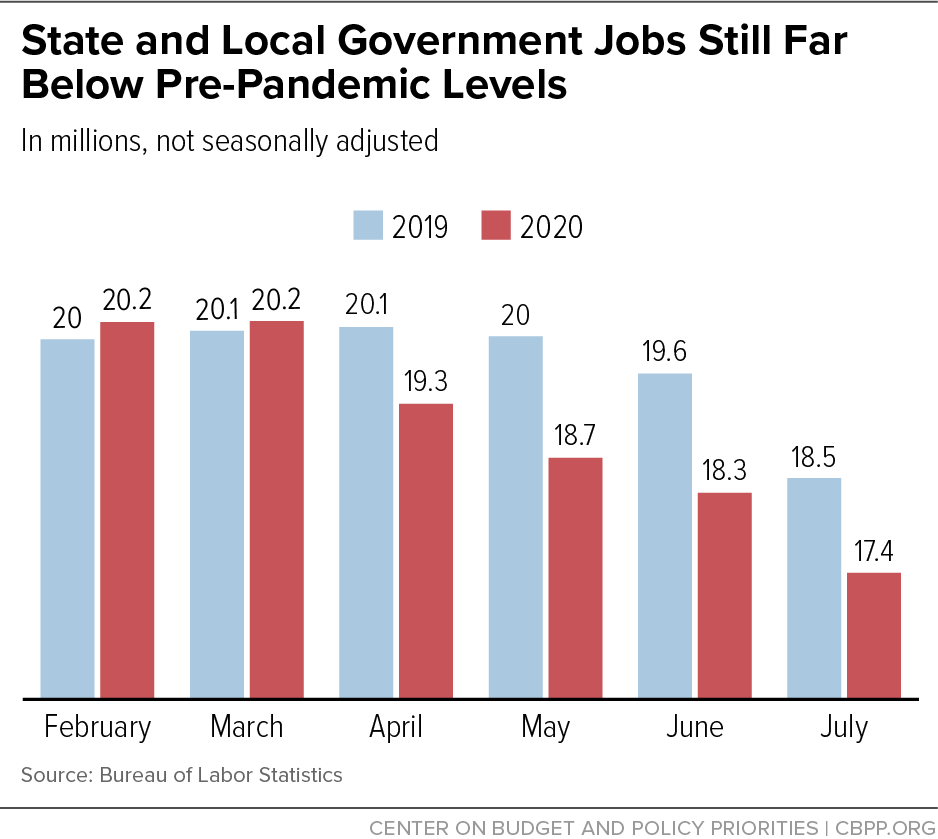 As some states gradually reopened their economies — in many cases hastily — in May and June, a modest burst of new activity prompted some forecasters to improve their outlooks and caused a bit more tax revenue than expected to trickle into the coffers of a few states — though revenues were still sharply down overall. But signs of an economic recovery remain mixed, with private sector hiring continuing to tick upwards, but slowing in July and still far below pre-COVID levels. Since the massive spike in unemployment insurance claims in March and April, the number of new claims has slowed, but still far exceeds pre-crisis levels; we have now witnessed 20 straight weeks of more than 1 million new unemployment claims. Meanwhile, some data suggest that a growing number of small businesses have closed permanently.

The federal failure to address the public health emergency effectively is preventing a return to economic normalcy, even in places that responded aggressively to suppress the virus’ spread. In California, for example, a sharp spike in new cases (after the state earlier appeared to have the virus under control) pushed state and local policymakers to impose a second round of lockdowns in mid-July, causing a renewed surge of unemployment claims and sending new job postings plummeting.

That (and earlier evidence) indicates that states and localities that hastily reopened businesses didn’t see meaningful or sustainable improvements in their economies. Georgia and South Carolina, for example, continued to see depressed business activity even after partially reopening. And consumer spending, employment, and the share of small businesses open also fell in states that never implemented a statewide stay-at-home order, including Iowa and Utah.

States haven’t finished shaping their current budgets. Many state budgets for the 2021 fiscal year (which started on July 1 in most states) depend on revenues that are now expected to be substantially lower and do not fully account for rising costs. Almost half the states adopted their 2021 budgets before the pandemic; most of them are in the middle of a biennial budget that runs from July 2019 to June 2021, while some have one-year budgets that they adopted before April. Only a handful of these states have already revised their budgets. Another six states enacted stopgap funding measures or otherwise delayed adopting a full budget for fiscal year 2021, and even states that adopted their budgets will undoubtedly revisit them as the pandemic’s toll on revenues and costs becomes clearer. Simply put, most states are operating under unrealistic spending plans that will require reworking after the federal debate over additional aid concludes.

For the health, economic, and fiscal factors cited above, state shortfalls could soon spiral further, putting states in an even tougher position. Another sizable round of federal aid is crucial to blunt or reverse the serious harm that state and local policymakers are already doing to state and local services — and the families and communities that rely on them — and more significant harm that might be on the horizon if health and economic trends don’t improve.

States Continue to Face Large Shortfalls Due to COVID-19 Effects

July 7, 2020
PreviousChildren Facing Very High Hardship Rates
NextIn Case You Missed It...
Stay up to date
Receive the latest news and reports from the Center