SNAP Helps Kids Over the Long Term, Too

Our series this week on SNAP and children has shown that SNAP (formerly food stamps) helps a diverse group of low-income children, lifts millions of them out of poverty, and enables millions of families to afford adequate food for their kids.  Today, we explain that while SNAP provides only a modest benefit, averaging just $1.35 per person per meal for households with children, it has surprisingly important effects on children’s health, education, and long-term outcomes.

Here’s what the research shows:

SNAP improves children’s health.  Adequate nutrition during infancy and early childhood is essential to children’s growth, health, and development.  Children raised in households without enough affordable, nutritious food are likelier to suffer poor health, not get vitamins and minerals important for their health, face deficits in cognitive development, and exhibit behavioral and emotional problems.

SNAP enables families to spend more on food and frees up resources they can use to meet their health and other needs.  Studies show that children receiving SNAP are less likely than other low-income children not receiving SNAP to be in fair or poor health or underweight, and their families are less likely to make tradeoffs between paying for health care and paying for other basic needs, like food and housing.

Children receiving SNAP do better in school.  Access to an adequate, healthy diet during early childhood is essential to developing the skills crucial for school success — including memory, emotional stability, and social skills.  Research suggests that participating in SNAP can lead to improvements in reading and math skills among elementary school children, especially young girls. 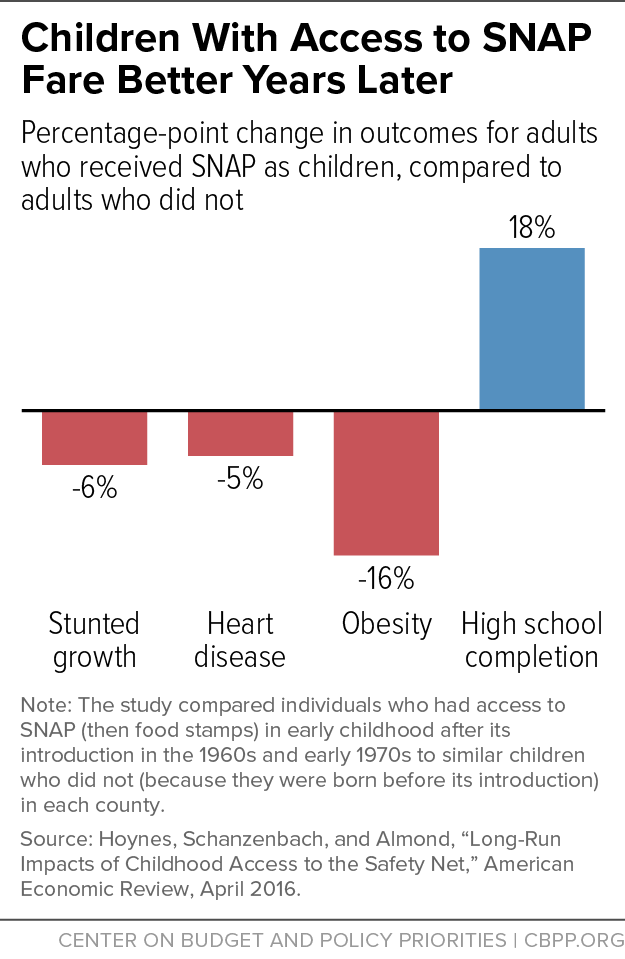 Early access to SNAP can improve long-term health and economic outcomes.  Poor nutrition during childhood may harm health and earnings decades later by altering a child’s physical development and ability to learn.  Researchers comparing the long-term outcomes of people in different areas of the country when SNAP expanded nationwide in the 1960s and early 1970s found that disadvantaged children who had access to food stamps in early childhood and whose mothers had access during their pregnancy had better health and economic outcomes as adults than children who didn’t have access to food stamps.

June 9, 2022
PreviousSNAP Keeps Food on the Table for Low-Income Kids
NextIn Case You Missed It...
Stay up to date
Receive the latest news and reports from the Center