With policymakers providing the needed funds, state and local housing agencies are restoring many of the housing vouchers lost to the sequestration cuts in recent years.  But restoring the rest — which the President and Congress should prioritize in their fall negotiations over a final 2016 budget — will likely require relief from sequestration.

Agencies restored 30,000 vouchers to low-income families over the past year, new data from the Department of Housing and Urban Development (HUD) show (see first graph).  That’s about one-third of the 100,000 vouchers cut in the 16 months after sequestration took effect in March 2013. 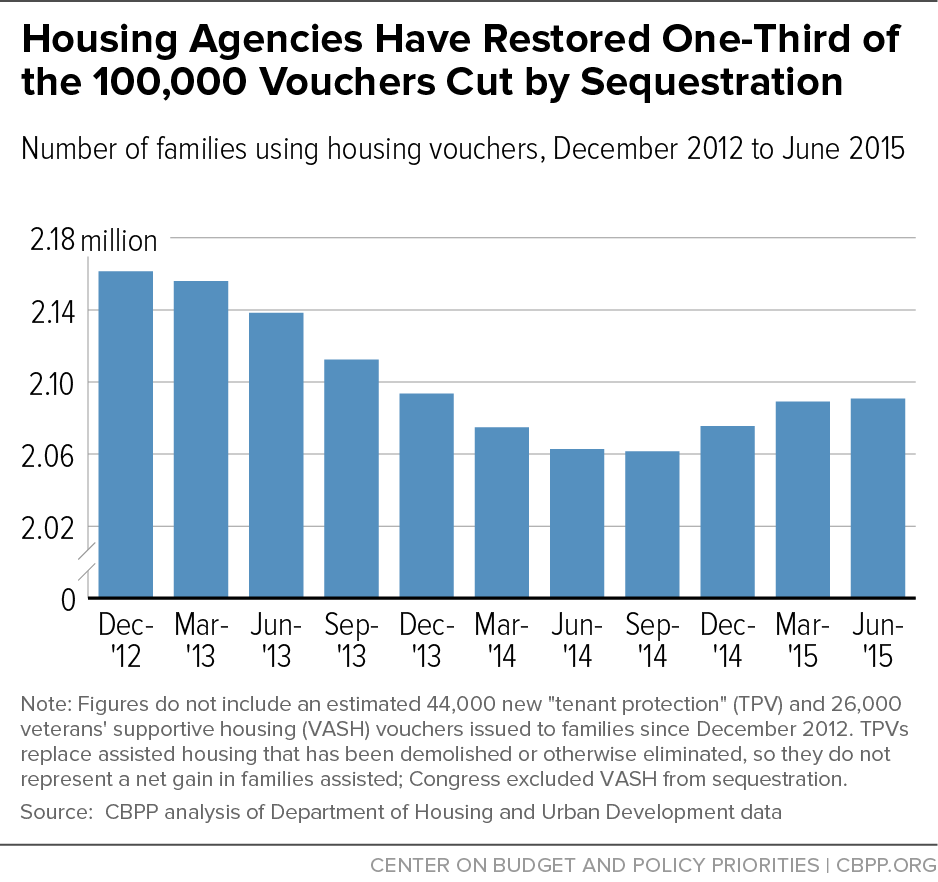 Moreover, agencies are poised to restore more vouchers in the final months of this calendar year.  The number of “vouchers on the street” — that is, vouchers issued to families that are searching for an apartment to rent with them — remains unusually high, according to the HUD data (see second graph). 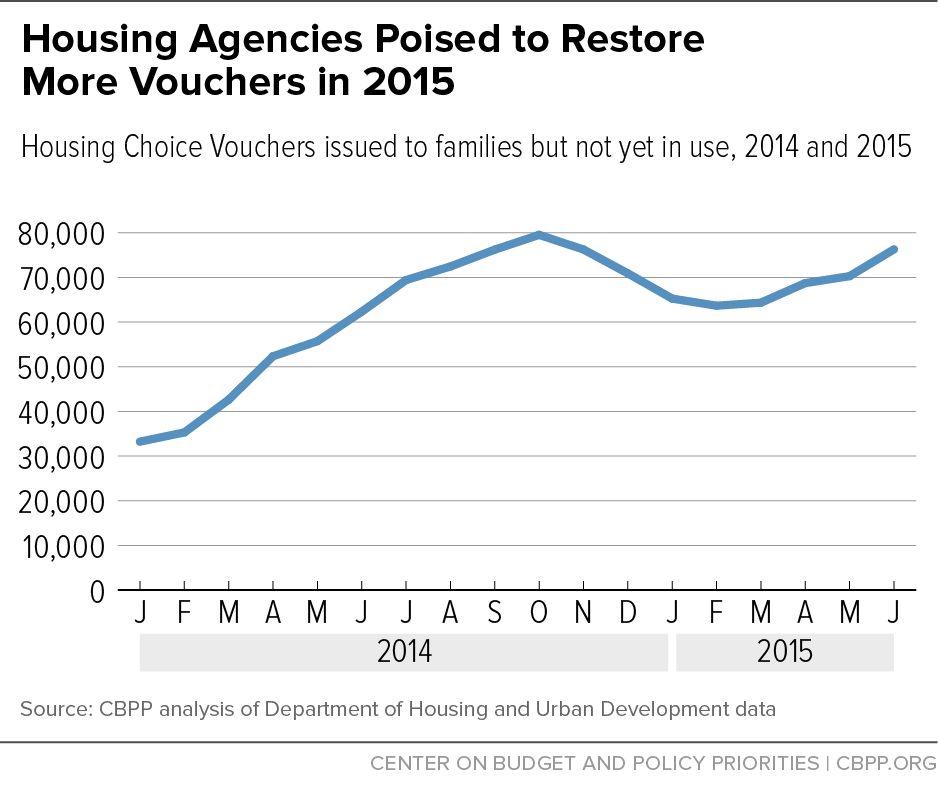 This progress, while modest, is welcome.  Housing vouchers not only reduce poverty and homelessness, but also help low-income families move to safer, low-poverty neighborhoods with good schools.  That, in turn, can improve families’ health and children’s school performance, chances of attending college, and income as adults.

Yet only 1 in 4 families eligible for federal rental assistance receives it, and the growing gap between housing costs and incomes is squeezing increasing numbers of low-income renters.  As a result, homelessness remains a serious problem, as recent declarations of “homelessness emergencies” in Los Angeles and Portland, Oregon show.

Restoring the remaining vouchers cut by sequestration should therefore be a priority in the coming weeks in negotiations over a final 2016 budget.  To achieve this goal, HUD’s 2016 budget should include:

1. Funding to renew all of the nearly 2.2 million vouchers that will likely be in use at the end of this year.  This will require $18.05 billion in 2016, or $560 million above the 2015 funding level, according to CBPP estimates based on the new HUD data.  While the House-passed Transportation-HUD funding bill meets this goal, the Senate Appropriations Committee’s bill doesn’t.

2. Sufficient funding to restore the remaining vouchers cut by sequestration. President Obama’s budget requested $512 million to restore an additional 67,000 vouchers, including 30,000 vouchers targeted to reduce homelessness among families with children and veterans, help victims of domestic violence who are forced to flee their homes, and prevent the separation of children from their families due to a lack of affordable housing.  The Senate bill takes a step in this direction: it includes $75 million for 10,000 new vouchers for homeless veterans and $20 million for some 2,500 new “family unification” vouchers to help families with children and youth to stay together.  The House bill includes no funding to restore vouchers.

However, it will be exceedingly difficult to fully restore the lost vouchers — and address homelessness and other urgent domestic priorities — without relaxing the sequestration-level spending caps, under which funding for domestic discretionary programs will fall to its lowest level as a share of the economy in 50 years.  That’s just one of many reasons that policymakers should provide sequestration relief.

February 19, 2015
PreviousTweet Chat: Q & A About Non-Defense Discretionary Funding
NextEven Without Sequestration, Non-Defense Spending Still Headed Toward Historic Low
Stay up to date
Receive the latest news and reports from the Center