Congress should act now, through the Build Back Better Act, to make historic improvements in housing assistance for people experiencing the greatest hardships. The current system of housing assistance was insufficient long before the COVID-19 pandemic increased the number of people struggling to pay the rent. As Congress crafts recovery legislation, policymakers should make once-in-a-generation investments in key affordable housing programs, including the highly effective Housing Choice Voucher program. These investments would help create a path toward ending homelessness and significantly reducing housing instability for households with the lowest incomes, including families with children, people living with disabilities, seniors, and others.

The budget resolution, passed in August by both the Senate and House, makes clear that the Senate Banking Committee and the House Financial Services Committee have the opportunity to make major investments in programs within their jurisdiction, which includes most federal housing programs. It is critical that policymakers meet this moment and not squander the opportunity to make the changes our nation’s housing system desperately needs.

In January 2020, months before the pandemic gripped the nation, communities across the country reported that more than 580,000 people were staying in homeless shelters or living on the street. Thirty states reported a rise in homelessness and the number of individuals living on the streets exceeded the number of individuals living in shelters for the first time since the Department of Housing and Urban Development started gathering these data.

At the same time, some 24 million people in low-income renter households — most of whom (62 percent) are people of color — paid more than half of their income for rent and utilities. People often wait years to receive rental assistance, if they can get it at all. In fact, only 1 in 4 eligible households receives assistance at all.

Today, an estimated 11.4 million adults living in rental housing are not caught up on rent. (See first chart.) 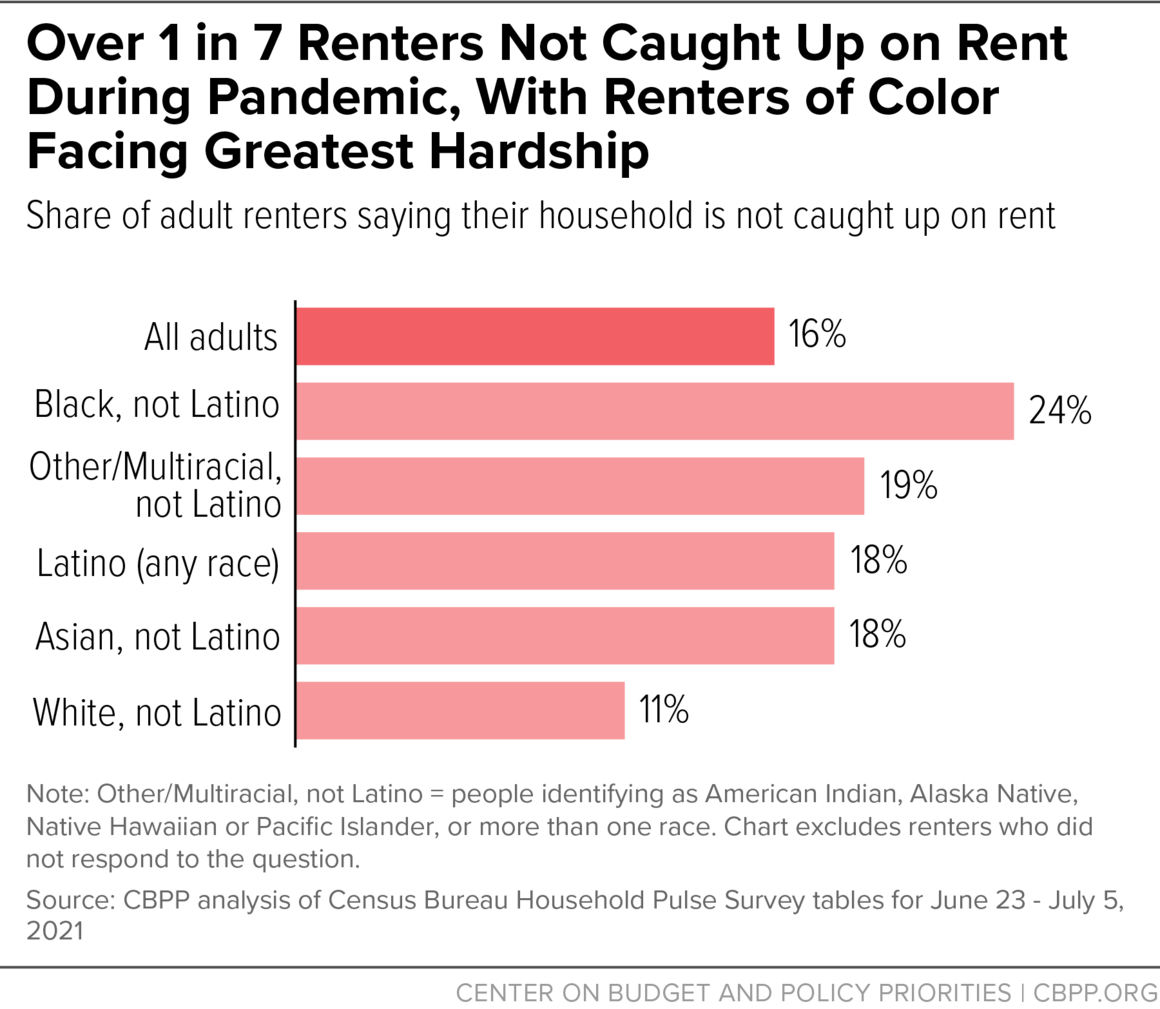 This housing instability is felt even more acutely by people of color, people living with disabilities, and families with children. (See second chart.)

The pandemic shined a light on the harsh realities that people experiencing housing instability and homelessness face. If we fail to make deep and lasting investments in housing in the recovery legislation, we risk continued growth in the number of people living on our streets or in unstable situations, leading to poor economic, education, and health outcomes for millions of people, including children, who face a myriad of negative outcomes when their families are unable to afford stable housing.

Lawmakers can make significant progress toward a more stable future for millions of households with extremely low incomes with investments in three critical areas:

It's time for Congress to make these investments and support overdue changes to fill the gaps in our housing safety net. It’s in our best interest to support homes where families and children can thrive and to put an end to our national housing affordability and homelessness crisis.

Families Wait Years for Housing Vouchers Due to Inadequate Funding

March 30, 2017
PreviousAfter Child Tax Credit Payments Begin, Many More Families Have Enough to Eat
NextRecovery Legislation Should Include Health Policies to Boost Coverage, Reduce Disparities
Stay up to date
Receive the latest news and reports from the Center