Some congressional Republicans may argue that after repealing the Affordable Care Act’s (ACA) Medicaid expansion, they could give states the flexibility to continue covering some or all of the expansion population through a Medicaid block grant or per capita cap. That’s a false promise.

If the Medicaid expansion — which has enabled at least 11 million people to get coverage — is repealed, any federal Medicaid spending related to covering those people in the future would count as new spending, relative to current law. But the express purpose of a block grant or cap is to cut federal Medicaid spending, not add to it. Those cuts would prevent states from maintaining the rest of their Medicaid programs — that is, their Medicaid programs in place before the ACA allowed them to expand eligibility — let alone continue covering the expansion population.

Block grants and per capita caps are both designed to produce large federal savings over time by shrinking federal funding for state Medicaid programs, relative to current law. This would shift significant costs to states and almost certainly force them to cut Medicaid, placing millions of low-income people at risk of becoming uninsured or underinsured.

Last year’s House Republican budget plan is an example. It gave states the choice between a per capita cap and a block grant, and would have cut federal Medicaid spending by $1 trillion over ten years and by 33 percent by the tenth year, 2026 (see graph). Those figures don’t include the cuts from repealing the Medicaid expansion. 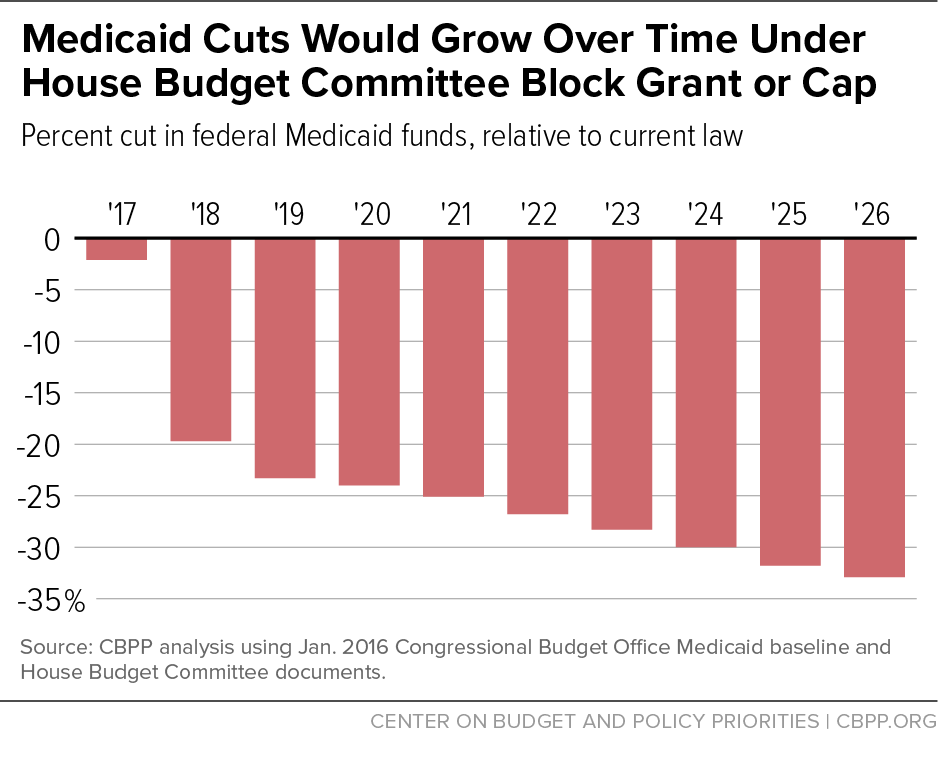 Congressional Republicans may also add some upfront funding for states to temporarily maintain coverage for the expansion population as part of a block grant or cap. But the large and growing cuts in federal funding over time required under the block grant or cap would easily swamp that initial increase. States would not only have to drop the expansion population, but also eliminate or scale back coverage for tens of millions of other beneficiaries unless they raised taxes or drastically cut education and other state spending. Cuts to eligibility, benefits, and provider payment rates would, in turn, hurt hospitals, community health centers, and other providers.

January 17, 2017
PreviousWatch: CEA Chair Jason Furman on Government's Role in Fighting Poverty
NextIn Case You Missed It…
Stay up to date
Receive the latest news and reports from the Center